Comments Off on Frank Ocean’s ‘Channel Orange’ hits No. 1 in 10 countries 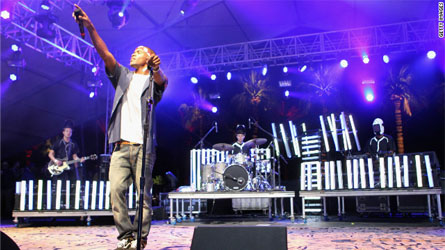 Frank Ocean is riding a wave of success at the moment. Not only has his new album, “Channel Orange,” received plenty of praise, but it’s also hit No. 1 on iTunes in 10 countries, can you believe that. I feel like, him coming out the closet just before the release was risky thing but it worked.

After Ocean’s anticipated album was released early in digital form at midnight on Tuesday, it went on to take the top spot on iTunes in the U.S.; Canada; Denmark; Greece; Ireland; Norway; Sweden; the U.K.; Australia; and New Zealand.

Billboard noted upon the album’s digital release that there’s the possibility of a Top 10 debut on the Billboard 200 for the R&B artist, who’s received support from high-profile personalities like Beyonce and Russell Simmons after eloquently opening up about his sexuality near the July Fourth holiday.

Im not sure as to when SA will get it but the physical edition of “Channel Orange” will be released July 17.

Joining Ocean in the success circle this week is Chris Brown, whose fifth studio album, “Fortune,” debuted at No. 1 on the album charts in the U.S., the U.K. and the Netherlands.

Comments Off on FRENCH MONTANA – Pop That (Explicit Version)
Tweet

I personally think that this free album is a winner. 50 had us going there when he said this was going to be his 5th studio album lol. The real album only drops later this year which will be part of Interscope…..Seems like Jimmy put that money up.

Download it by CLICKING ON THE COVER and tell me what you think?